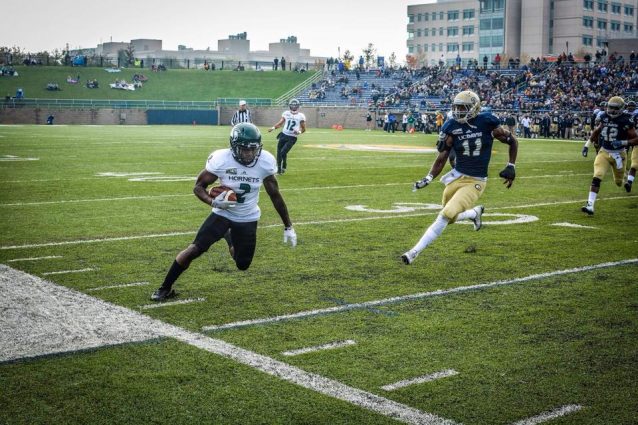 Sports365: Battle of the Causeway

The first thing you think of when someone says November is probably Thanksgiving, but there's a lot of other exciting things going on this month. Whether you're looking to support your favorite local school,…

The first thing you think of when someone says November is probably Thanksgiving, but there’s a lot of other exciting things going on this month. Whether you’re looking to support your favorite local school, cheer on the Kings, or run, there is something to scratch your active itch this November.

The Sacramento State Hornets and the UC Davis Aggies meet once again for the 63rd annual Causeway Classic on Saturday, November 19. Promising to deliver fiery competition, the Aggies and Hornets will give the 49ers and Raiders a run for their money for the best NorCal football rivalry. Started in 1954, the Causeway Classic references the Yolo Bypass that connects the two cities. While it’s always a hotly contested battle, UC Davis has a dominant stranglehold on the all-time series, winning the concrete Causeway Classic Trophy 44 times.

Last year’s Classic was won handily by UC Davis, avenging their home loss to the Hornets — in fact, the teams have traded off away-wins over the past three years. Both teams are coming into the match 2-8, but both could redeem their season with a win this Saturday. While UC Davis leads the overall series by a large margin, they are only 2-2 defending the new Aggie Stadium. Sacramento State seems to play their best road games on the road at Aggie Stadium (their last road win was in the 2014 Causeway Classic at Aggie Stadium), so the action on the gridiron should get interesting.

No matter what side you’re on, don’t miss your chance to witness the biggest game in the Sacramento region. For more information on this year’s Causeway Classic, click here.

Active Events to be Thankful For:

If you’re looking for more ways to cheer on your favorite team or to work off that Thanksgiving meal, then check out these events.

College Basketball Double Header
Golden 1 Center
Nov 21
In case you can’t get enough of UC Davis and Sacramento State, watch their basketball teams duke it out for the first time at the Golden 1 Center. Bonus, you’ll also get to see Cal take on San Diego State.

Sacramento Kings vs Oklahoma City Thunder
Golden 1 Center
Nov 23
The Kings will look to defend their home court as Russel Westbrook leads his Thunder into town.

Run to Feed the Hungry
Sacramento State
Nov 24
Wake up early on Thanksgiving and give back to both the community and your body. This run will not only help you feel better about grubbing later in the day, but it will also benefit Sacramento Food Bank and Family Services.

Thanksgiving Morning Slow Flow Yoga
The Yoga Seed Collective
Nov 24
Is running not your thing? Treat your body to some Slow Flow yoga before chowing down.

Check back with Sports365 in December to see what activities I am most excited for…or plan ahead on your own by checking out Sacramento365’s Sports page!