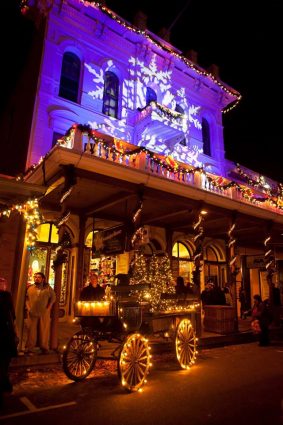 Light up the Season with Holiday Cheer

One of the region’s favorite holiday spectaculars is making a triumphant return this year, and it promises to be bigger and better than ever. The 8th annual Macy's Theatre of Lights will once again feature a…

One of the region’s favorite holiday spectaculars is making a triumphant return this year, and it promises to be bigger and better than ever. The 8th annual Macy’s Theatre of Lights will once again feature a live-action telling of the Christmas favorite, ‘Twas the Night Before Christmas. Theatre of Lights is presented by the Old Sacramento Department of the Downtown Sacramento Partnership in cooperation with Downtown Sacramento Foundation (DSF), the City of Sacramento, Old Sacramento merchants, and, of course, Macy’s.

While the highlight of the night will be the jolly ol’ man himself, Santa Claus, you also don’t want to miss the tale of early Sacramento pioneers. The holiday show starts off with a tale of the trials and tribulations of early pioneers and some of the debauchery they took part in to celebrate their new home. Children and adults alike will be captivated by the sight of Santa flying in on his sleigh led by reindeer. Santa is in town a little early to deliver treats to all the good boys and girls of Old Sacramento and this is your chance to see him! While the classic tale is enough to get anyone down to Old Sacramento, the overall production of Theatre of Lights is what makes this performance a holiday favorite.

Theatre of Lights is the perfect event to gather the whole family and head down to Old Sacramento for a fun and festive night. Performances will be running on Thursdays through Sundays until Christmas Eve, but there are a couple special dates you might want to circle on your calendar. This Wednesday, November 23 will feature the premiere of this season’s Theatre of Lights preceded by the lighting of this year’s Umpqua Bank Christmas Tree. You’ll also want to be sure to check out the special Sunday events (Selfie Sunday December 4, Holiday Cosplay December 11, and Rogue Sunday December 18). For more information on Sacramento’s favorite holiday tradition, click here.