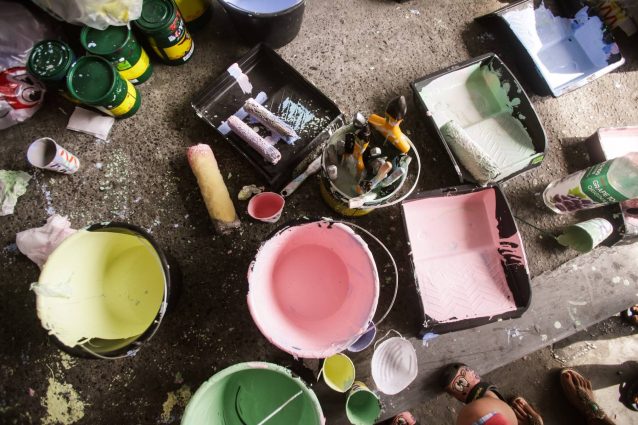 A Year in Review: A Look Back at our Featured Artists

2016 has been an explosive year for arts and culture in Sacramento and luckily, we at Sacramento365 have had the chance to chat with many of the movers-and-shakers who continue to shape our region's recent…

2016 has been an explosive year for arts and culture in Sacramento and luckily, we at Sacramento365 have had the chance to chat with many of the movers-and-shakers who continue to shape our region’s recent creative renaissance. This month we’re sharing our favorite lessons and moments of candor from our discussions with this year’s cohort of featured artists.

Stepping into Gioia Fonda’s Verge Center for the Arts studio, you’ll immediately get a sense of her personality. Her den of creativity radiates joy, the very meaning of her first name. In it, you’ll find drought tolerant plants made of discarded materials, psychedelic flags, intricately patterned canvases, scraps from her daily bike rides, projects to be graded…and lots and lots of forks.

Gioia Fonda considers herself to be an interdisciplinary artist (“the word ‘multimedia’ means something else nowadays”). “I switch genres all the time…what’s consistent with me is that my interests change.” What unites her seemingly disparate work is vibrant color and her attention detail (or tedium).

“Arts make a healthy society, adding vibrancy and civic healing to everyday life. Artists have the hard task of convincing people that they need art…and this education isn’t just for kids; adults need to learn about art, too.” At Sacramento City College she finds the “best potpourri of humans”, where mostly everyone is receptive to learning and are looking to improve.

“Once students are exposed to art, they are curious to learn about everything.”

Her Feature Story: #GiveAFork About the Arts

Davis-born and eldest child of nine, fashion designer Karisa Gold is known for her Old Hollywood, sex bomb silhouettes, but the road to creating her jaw-dropping collections was anything but glamorous. Hard work, perseverance, and putting herself out there (literally and figuratively) have what have kept her dreams of producing wearable art alive.

“I want my pieces to emulate the class of Audrey [Hepburn] with the sass of Marilyn [Monroe]. The silhouettes [I use] make you stand taller, feel magical, and more confident.” And that she has. Every piece she has created so far has been feminine, alluring, and ooze sophistication.

Her Feature Story: Designing Her Own Story

The key to Big Idea Theatre’s big success? The passion and razor-sharp focus of its Artistic Director, Benjamin Ismail, just might have something to do with it. We were lucky enough to chat with the company’s fearless leader to learn more about his passions and Big Idea Theatre’s bright future.

Ismail finds the stress of theatre life to be well worth it. “Although it may not seem like it from appearances, I’m insecure and shy. Through theatre, I’ve found strength. I know what I’m capable of…I’ve learned to trust myself. I’ve challenged myself and I’ve been blessed with so many wonderful opportunities.”

His Feature Story: In a New Direction

Sacramento’s Godmother of Contemporary Art, Gale Hart at her spacious 19th Street studio on the heels of her 60th birthday bash. The vegan, skateboard-loving artist has more to celebrate than just another year in this life; in January, Hart was selected to construct her public art installation for the new Golden 1 Center (yes, alongside that Jeff Koons piece).

From a charming studio (or as he calls it “hobbit hole”), Johnston inspires thousands around the world through Mikeslessons.com, a website allowing aspiring drummers to learn and practice on their own time. As if that’s not impressive, on YouTube, his riffs and rudiments have been viewed over four million times and Modern Drummer readers awarded Johnston the “Clinician/Educator of the Year” award. And, oh yeah, Johnston was a world-touring rockstar at 21 and lived to tell about it.

For those looking to get into the music industry:

His Feature Story: To The Beat of His Own Drum

Best known for striking metal leaf and layered resin paintings, her work, inspired by her subconscious, connects to universal truths and experiences through text and delicate koi fish and feather designs. She’s also known for famously ruffling a few figurative feathers with her censored “Politically Vulnerable” collection. We encourage you to get to know Conrad’s dangerous mind and her plans to keep shaking up Sacramento’s art scene.

As the leader of the Calidanza Dance Company, Valencia seeks to advance, celebrate and preserve the culture of Latino, Chicano, and Native populations for generations. And he’s been pretty good at it. He’s worked and toured with some of the best instructors from across the border, choreographed traditional and modern professional productions in and around the Sacramento region, and was even awarded the 2011 Maestro Award from The Latino Arts Network of California for his efforts. What may be the most peculiar thing about Valencia’s success is that he juggles his time at Calidanza with the California Department of Corrections and Rehabilitation.

Muralists and illustrators, hailing from near and afar took part in the largest art exhibition Sacramento has ever experienced — on the walls of our great city. From August 20-27, the Sacramento Mural Festival gave 12 artists free range to transform often forgotten segments of our alley network into stunning public art spaces. Friends of Sacramento Metropolitan Arts Commission and LeBasse Projects are banking that these indelible marks on our city will give notice to the global arts community of Sacramento’s creative spirit.

Sacramento365 reached out to the four local artists — Jake Castro, David Fiveash, Irubiel Moreno, and Alicia Palenyy — participating in the Sacramento Mural Festival to find out how they plan to paint the town.

Jake Castro:
His thoughts on the Sacramento arts community: “The Sacramento community is continually expanding and I feel like I’m part of a supportive community. Co-op working spaces [e.g. The Urban Hive and Hacker Lab] really encourage collaboration and innovation among artists and makers…and this helps push us to work harder and think more creatively.”

David Fiveash:
How he reacted to the Sacramento Mural Festival news: “I was at a swimming pool and did a back-flip off the diving board. I was very happy!”

Irubiel Moreno:
A firm believer in the power of collaboration, Moreno is buzzing off the current creative energy emanating from our local arts community and is stoked that international artists get to experience our city’s renaissance: “[Having] international artists come to Sacramento is a great thing…it will help Sacramento get recognized as a destination city for art.”

Alicia Palenyy:
How she’d like the Sacramento Mural Festival to evolve: “Some type of inter-city or international artist exchange would be a dream come true. Two places having a festival simultaneously (more or less) and the festivals ‘trade’ artists for a week or two.”

Our SMF Feature Stories: Sacramento Mural Festival to Paint the Town and Get to Know the Local Creatives Behind SMF

Academic, media producer, artist. jesikah maria ross is all these things and more. The interdisciplinary media-maker is in the business of storytelling, artfully bringing people together to examine issues and develop solutions for where they live. Her craft – oft described as participatory media, socially engaged art, or community engaged journalism – doesn’t just produce stirring photos, videos, and interactive experiences; it leads to dialogue, healing, and hope.

ross defines herself as a documentary artist that collaborates with communities to create spaces where people can speak to each other about issues important to them and feel heard. In any given project she’ll “conduct” as a researcher, convener, facilitator, project manager, and maker.

Straddling the fields of art, community development, and journalism, her practice results in film, audio, interactive websites and mapping, photo galleries, communication platforms, and well-produced public events. Alone, these forms are great, but when presented together, they convey not only her strengths in content curation but also paint a rich story of a community or issue. With each project, ross hopes to increase issue awareness, build capacity and relationships, and effect community change.

Her Featured Story: The Art of Change

Talented in both the visual and performing arts, Bryan Valenzuela is an unassuming tour de force. His mellow, laidback attitude is refreshing, especially for someone who’s garnered the amount of attention he’s earned lately.

Best-known for his detailed word-based drawings and as the lead vocalist for the psych-art rock band, Exquisite Corps, the thirty-something Midtown-based creative applied for the Golden 1 Center Art Program, devising a grand public art piece paying homage to Sacramento’s waterways through glass, a material he’s never worked with before. By surprise, his “Multitudes Converge” got the greenlight from The City of Sacramento and the Sacramento Metropolitan Arts Commission. Throwing caution to the wind allowed him to take on the largest and most challenging work of his career…and share space with the international pop artist, Jeff Koons.

His Feature Story: Taking a Leap of Faith

Humble, soft-spoken, and reflective, Jacob Golden has lived many lifetimes. From jet-setting North America and Europe as the front man of local band Birthday to pulling heartstrings as a solo artist, Golden was shining. However, after bouncing between record labels, he left the music industry, tired of being a cog in the machine. Thankfully, Golden hasn’t lost his luster, returning to the mic, this time on his own terms.

Golden’s advice for those aspiring to make it in the music industry: “Find something that you are interested in — writing, songwriting, performing — and recognize that you will need time to develop. And it’s important to put yourself out there…you do not need to be a perfectionist. The thought of only sharing your best work is tempting but leads to debilitation. You end up sabotaging yourself.”

Emerging photographer Andres Alvarez may not be a household name (yet), but his work should be loved by anyone who calls Sacramento home. Since moving to the River City, the artist has had a love affair exploring and revealing the beauty of the grid. From coffee shop patrons to Golden 1 Center’s progress to the characters of K Street, his candid film and digital photos are meticulously composed, showcasing the heartbeat of Sacramento.

Andres has taken to the streets, exploring what lies within his adopted city and inside his head: “photography became a way for me to reflect my thoughts, expose my habits, and discover what inspires me. My photographs are mirrors to my soul.”

In order to do so, he is putting techniques into practice with a number of self-imposed photo projects. Whether it’s cataloging Sacramento’s coffee culture, the Regional Transit system, or the construction around the Golden 1 Center, his photos show a fascination with the subtle quotidian interactions between people, places, and things.”People are obsessed with anything exotic to the point where they overlook their backyard. I’m interested in capturing the daily rhythm of Sacramento.”