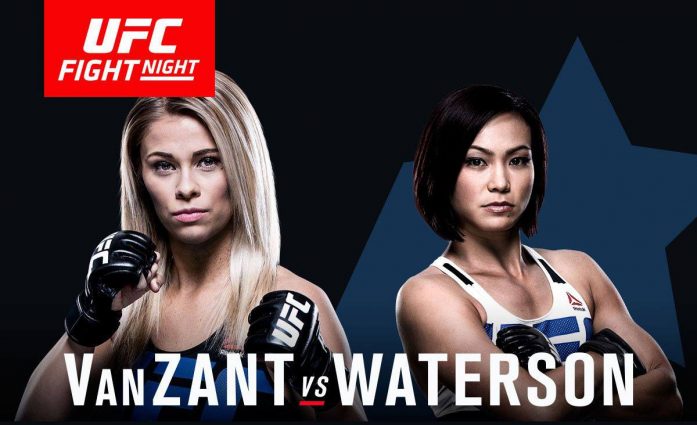 Photo courtesy of the UFC

Saturday marks the first time the Ultimate Fighting Championship (UFC) will be touching down in Sacramento’s Golden 1 Center. The day-long event features a bevy of brawls, including local fighters Paige VanZant, Urijah Faber,…

Saturday marks the first time the Ultimate Fighting Championship (UFC) will be touching down in Sacramento’s Golden 1 Center. The day-long event features a bevy of brawls, including local fighters Paige VanZant, Urijah Faber, and Josh Emmett. The two most anticipated fights are Paige VanZant vs. Michelle Waterson and Urijah Faber vs. Brad Pickett. No matter what you’ve got planned this Saturday, you might want to reschedule and head down to the Golden 1 Center for UFC Fight Night!

Some of the UFC’s brightest rising stars will be featured prominently in the spotlight. Paige “12 Gauge” VanZant looks to defend her adopted home (originally from Oregon, but she trains in Sacramento) in her second fight back after competing in Dancing with the Stars. Waterson a.k.a. “The Karate Hottie” looks to take down VanZant with her veteran experience and impeccable accuracy. VanZant vs. Waterson is pegged as the top fight of the night, but you can expect fireworks to fly all throughout the day.

The other premier fight pits Sage “Super” Northcutt against Mickey Gall. Northcutt, the youngest UFC fighter at age 20, was once considered the UFC’s chosen one but stumbled to his first loss at the beginning of the year. Northcutt will look to build momentum after regaining his winning ways in July. Gall is a relative unknown after only three fights, but he is undefeated. Gall gained his fame through calling out and defeating WWE standout CM Punk in his UFC debut. Be on the lookout for Gall’s rear-naked choke as he has won all three of his bouts.

Of course, many Sacramentans are most looking forward to local hero Uriah Faber’s final UFC bout. “The California Kid” has been fighting professionally for over 10 years and looks to go out on a winning note in front of his hometown fans. In a career that spans 43 fights, Faber has delivered some incredibly exciting moments and will look to bookend his story with another one against “one Punch” Pickett. No matter if you’re a die-hard UFC fan or not, Fight Night is worth the price of admission. UFC Fight Night is scheduled to start at 12:30pm on Saturday, December 17. For more information on the festivities, click here.

Note: If you’re unsure about mixed martial arts then be sure to head down to the Golden 1 Center today, Thursday, December 15, from 1pm to 3:30pm for a free chance to check out some open workouts from the evening’s top fighters. This is a great chance to get a taste of the event without having to commit to a full priced ticket. You can also head down to Golden 1 Center tomorrow, Friday, December 16 from 3pm to 4:30pm for the weigh-ins.

If takedowns and head kicks don’t quite tickle your athletic fancy then be sure to check out these fun events!

Sacramento Kings vs Philadelphia 76ers
Golden 1 Center
Dec 26
The Kings will show the 76ers what a functional arena is like in this game. (The previous game between these two had to be rescheduled due to condensation on the floor in Philadelphia.)

New Year’s Eve at Topgolf
Topgolf Roseville
Dec 31
Looking for a unique and active way to spend this NYE? Then head to Topgolf with five of your best friends!

Check back with Sports365 in 2017 to see what activities I am most excited for…or plan ahead on your own by checking out Sacramento365’s Sports page!