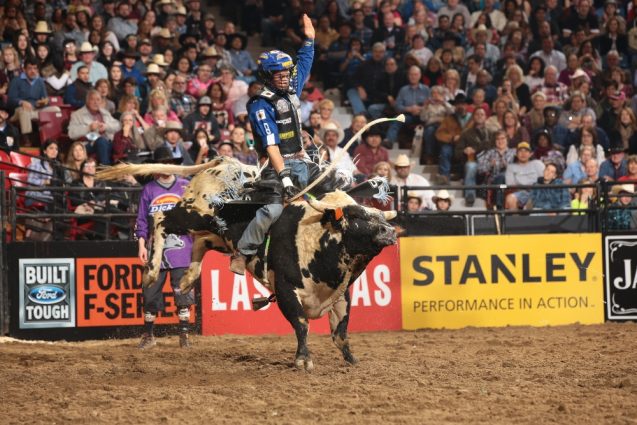 Photo by Andy Watson via PBR.

The River City will be getting "a little bit country" this month with the return of the Professional Bull Riders (PBR): Built Ford Tough Series. Bull riding is known as “the most dangerous eight seconds…

The River City will be getting “a little bit country” this month with the return of the Professional Bull Riders (PBR): Built Ford Tough Series. Bull riding is known as “the most dangerous eight seconds in sports” and for a good reason. Willingly hopping onto a bull — 1,600 pounds of ferocious muscle and wrath — must be one of the most intimidating things a person can do, yet somehow, PBR has found 35 riders ready to hold on for dear life.

My experience with bull riding is pretty minimal. I once attempted to ride a mechanical bull at the California State Fair and was quickly thrown off in about 0.2 seconds…in front of 20-30 people. Quite possibly one of the most embarrassing moments of my life, the experience proved that the sport isn’t as easy as it looks. A few months later, I was able to see how the professionals handled the real-life bucking bulls at Sleep Train Arena and was blown away by just how insane the sport is.

What can you expect at PBR? From January 27-29, you’ll see the toughest animals on the planet are matched against the world’s most resilient athletes at the Golden 1 Center. Wrapped in a rock concert environment, complete with pulsating music, explosive pyrotechnics and fast-paced production, riders will do their best to stay on their raging bull for eight seconds. There are no timeouts. No towels to throw in. There’s just one rule: “hold one (but only with one hand.)”

The PBR: Built Ford Tough Series’ first stop at Golden 1 Center is going to be an action-packed three days. To witness the white-knuckle action for yourself, click here.

If bull riding isn’t your thing, then check out these other sporty events taking place at Golden 1 Center.

Monster Jam: Triple Threat Series
Golden 1 Center
Jan 20-22
The week before PBR, man will be taking on a larger, more mechanical beast in Golden 1 Center for the first time.

Check back with Sports365 in February to see what activities I am most excited for…or plan ahead on your own by checking out Sacramento365’s Sports page!