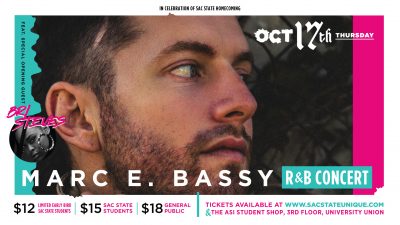 Marc E. Bassy’s favorite song to perform is an unreleased track that samples Radiohead, according to interviews he has had with big news stations such as VIBE. His hit EP, East Hollywood, was also inspired by a breakup and enabled his passion and creativity to flow into his R&B-style musical artwork.

This concert also has the pleasure of hosting Bri Steves as the opening artist for Bassy. Bri Steves is an East Coast native, representing the popular city of Philadelphia. Bri Steves will bring a fun and energizing Bay Area meets East Coast, R&B twist-type of opportunity for this exciting big concert event.