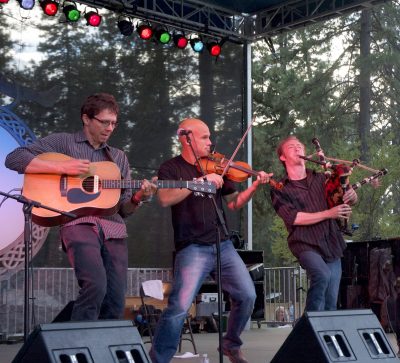 Dynamic Celtic band Molly’s Revenge is known for its high energy and enthusiasm. The classic combination of bagpipes, whistle, and fiddle, with a backdrop of guitar, mandola, and bodhran guarantees an enjoyable experience for all fans of Scottish and Irish music. Their arrangements of traditional jigs and reels update these tunes with a driving, hard-edged accent that always leaves audiences shouting for more.

They have performed at many of the top folk festivals and performing arts events in the USA, and prestigious events in Scotland, Australia and China.

David Brewer has been playing whistle and four types of bagpipes for about 20 years. He studied in Scotland under some of the best pipers in the world. His authentic and unique style of playing has earned him the reputation of being one of the most accomplished pipers on the West Coast.

John Weed is a classically-trained violinist who switched to playing Irish fiddle about 20 years ago. John lived in Ireland in 2000 and taught fiddle workshops at the International Music School in Doonbeg, County Clare.

Stuart Mason has been collecting and performing traditional music for over 40 years. He has appeared on stage from Ireland to China performing Celtic, old time bluegrass and his original compositions, which have won awards from the West Coast Songwriters Association.