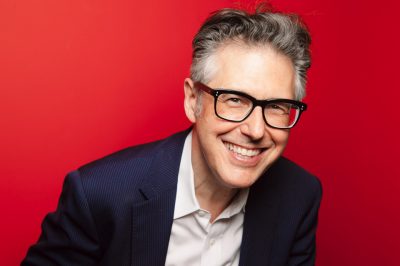 Note: The Mondavi Center is sad to announce the cancellation of the 20-21 Season of live performances.

Ira Glass, the beloved host and creator of NPR’s hit weekly radio show This American Life, invites us into his creative process, mixing audio clips, music, and video to tell captivating stories live onstage, and sharing lessons and insights gathered over his career. This American Life  is heard each week by over 2.2 million listeners on more than 500 public radio stations, with another 2.5 million downloading each podcast.

Under Glass’s editorial direction, This American Life has won the highest honors for broadcasting and journalistic excellence, including six Peabody awards. In 1999, the American Journalism Review declared that This American Life was “in the vanguard of a journalistic revolution” and since then, a generation of podcasts and radio shows have sprung up — Radiolab, Invisibilia, StartUp, Reply All, Love + Radio, Heavyweight — building on the style of narrative journalism championed by Glass and his staff.

“A storyteller who filters his interviews and impressions through a distinctive literary imagination, an eccentric intelligence, and a sympathetic heart.” –The New York Times

Note: The Mondavi Center is sad to announce the cancellation of the 20-21 Season of live performances.