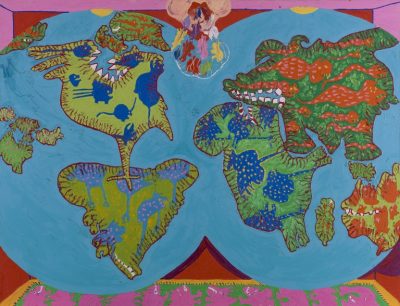 In 1962, Adeliza McHugh opened The Candy Store Gallery in a modest house in Folsom, California. The business did, in fact, begin as a candy store, but when that closed, McHugh converted it into an art gallery. There were just two rooms for the ceramics, paintings, and other art she displayed, though these small spaces featured makers who would become nationally and even internationally significant. Many of these artists -- including Robert Arneson, Roy De Forest, David Gilhooly, Irving Marcus, Gladys Nilsson, Jim Nutt, Jack Ogden, Sandra Shannonhouse, Peter VandenBerge, and Maija Peeples-Bright (née Zack) -- either taught or were students at the University of California, Davis, or Sacramento State College (now California State University, Sacramento).

Their work, along with that of many other artists, delighted visitors to the gallery for 30 years and helped put the whimsical, funky, and irreverent aesthetic of California’s Central Valley on the art-historical map. Held on the occasion of what would be the 60th anniversary of the gallery’s founding -- and in conjunction with a related show at the Jan Shrem and Maria Manetti Shrem Museum at UC Davis—this exhibition is the largest to date on the Candy Store and, as the trailblazing McHugh liked to say, celebrates art with a “kick.”

Parking is available within walking distance of the Museum, including street parking, parking lots, and public garages.