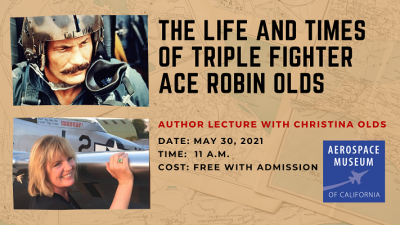 Join author Christina Olds as she shares the remarkable story of her heroic father, Robin Olds, a legendary pilot with a larger-than-life personality. Robin Olds was a graduate of West Point and an inductee in the National College Football Hall of Fame for his All-American performance for Army, Olds was one of the toughest college football players at the time. In WWII, Olds quickly became a top fighter pilot and squadron commander by the age of 22—and an ace with 12 aerial victories. But it was in Vietnam where the man became a legend. He arrived in 1966 to find a dejected group of pilots and motivated them by placing himself on the flight schedule under officers junior to himself, then challenging them to train him properly because he would soon be leading them. Proving he wasn’t a WWII retread, he led the wing with aggressiveness, scoring another four confirmed kills, becoming a rare triple ace.

In 2010, Christina Olds published a memoir of her father’s life titled Fighter Pilot: The Memoirs of a Legendary Ace Robin Olds. The book became a national bestseller, heralded by reviewers and readers as an exceptionally literary and lyrical biography. Christina has been working on a screenplay for Fighter Pilot, and is also working on two more books, the biography of her grandfather, Maj. Gen. Robert Olds, an instrumental leader in the development of early airpower, and her own memoirs about growing up with her Air Force dad and movie star mother.

A Vassar College graduate with a degree in creative writing, Christina is a sought-after speaker at Air Force and NATO bases, aviation museums and air shows, both nationally and abroad, and is dedicated to furthering her father’s legacy to inspire today’s active-duty fighter pilots around the world. She lives in Boise, Idaho and is the mother of a beautiful daughter, Jennifer Olds Newman, a costume designer in Hollywood, who is also devoted to furthering her grandfather’s legacy.