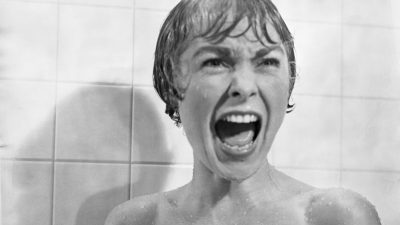 Alfred Hitchcock's landmark masterpiece of the macabre stars Anthony Perkins as the troubled Norman Bates, whose old dark house and adjoining motel are not the place to spend a quiet evening. When Marion Crane, spectacularly played by Janet Leigh, ends up at the Bates Motel after making off with $40,000 cash, there's hardly a film fan alive who doesn't know what happens next. First a private detective, then Marion's sister, search for her as the horror and suspense mount to a terrifying climax where the mysterious killer is finally revealed. (R)