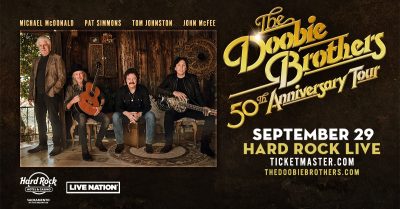 The Doobie Brothers are an iconic American rock act who have run the gamut from mainstream rock to blue-eyed soul. The Doobie Brother's tour dates, which include their 2017 Summer Tour, 2015 Southbound Tour, and stretch back all the way to their 1983 Farewell Tour, have taken them across North America and seen them unite with powerhouse rock performers like Chicago, Lynyrd Skynyrd, Ted Nugent and more. Throughout their many incarnations, The Doobie Brothers have been known for their eclectic rock sound, fused with elements of country, R&B and folk music, along with their impressive vocal harmonization. The latter gained the group entry into the Vocal Group Hall Of Fame in 2004, while the former has seen the band sell some 40 million albums over their five-plus decades in existence. In concert, The Doobie Brothers thrill with their combination of electrifying guitar work, tight group vocals, and the occasional saxophone solo as well. The Doobie Brothers have won two Grammy Awards, both in 1979, for their songs "Minute By Minute" (Best Pop Performance by a Duo or Group With Vocals) and "What A Fool Believes" (Record of the Year). They were also nominated for Album Of The Year for Minute By Minute in 1979, along with Best Pop Instrumental Performance for "South Bay Strut" in 1980.