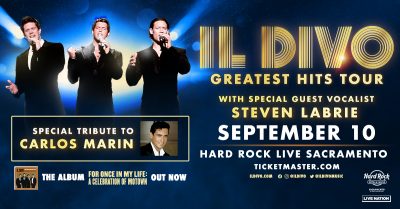 This classical crossover group smashes barriers and breaks ceilings in every genre they tackle, whether opera, pop, folk, or world music. Put together in the U.K. in the early 2000s as a result of a worldwide search by American Idol and Britain's Got Talent judge Simon Cowell, the four spectacularly talented, classically trained men of Il Divo quickly found their niche as classical-flavored pop stars. After releasing their acclaimed, self-titled album in 2004, Il Divo would quickly reach No. 1 on the United States' Billboard 200—as well as topping charts in other countries—with their breakthrough second album, Ancora. Their subsequent albums and collaborations—with Céline Dion, Juan Gabriel, and others—only found them further success. The Christmas Album remains a worldwide staple, while their 2015 masterpiece Amor and Pasión comprised Spanish-only songs in the styles of tangos, mambas, and boleros. The group's 2018 album, Timeless, features a number of rapturous covers, including "Hola," a Spanish-language reinterpretation of Adele's "Hello."