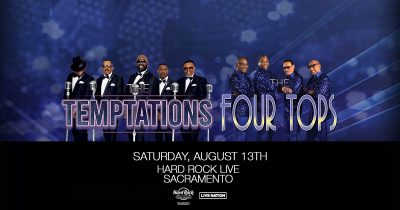 The Temptations and The Four Tops

The Temptations, often referred to as “American Music Royalty,” are world-renowned superstars of entertainment, revered for their phenomenal catalog of music and prolific career. The group will be celebrating their 60th Anniversary in 2021. To mark this milestone, the Temptations are planning a brand-new album, a national concert tour across the country, and an international concert tour in the UK in fall 2021.

The Four Tops, originally called the Four Aims, made their first single for Chess in 1956, and spent seven years on the road and in nightclubs, singing pop, blues, Broadway, but mostly jazz—four-part harmony jazz. When Motown’s Berry Gordy Jr. found out they had hustled a national Tonight Show appearance, he signed them without an audition to be the marquee act for the company’s Workshop Jazz label. That proved short-lived, and Stubbs’ powerhouse baritone lead and the exquisite harmonies of Fakir, Benson, and Payton started making one smash after another with the writing-producing trio Holland-Dozier-Holland.