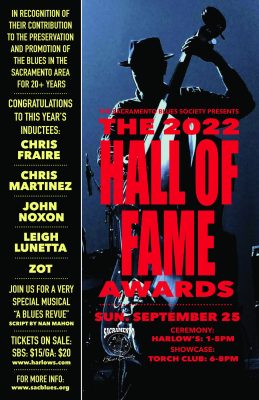 The Sacramento Blues Society is proud to announce the 2022 Blues Hall of Fame Awards. This is the 14th anniversary of the popular afternoon-into-evening event.

The Hall of Fame honorees are chosen each year in recognition of their contributions to the preservation and promotion of the blues in Sacramento for at least 20 years.

Full bios of inductees can be found here.

The production includes fifteen SBS member/performers, many of whom are HOF members themselves, and will include two of the 2022 HOF class, Chris Fraire and Leigh Lunetta.

Full bios of all inductees are on the SBS website.