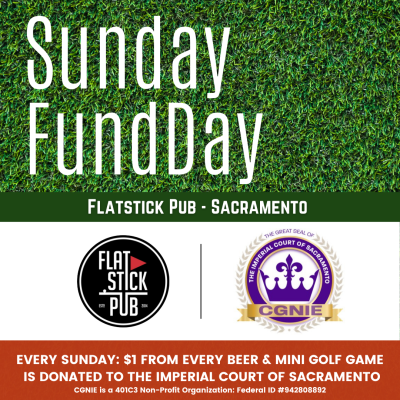 Sunday FundDay stems from the goal to make Flatstick Pub more than just a bar to play games at and drink really great local beer.

Every Sunday of the month, they'll be donating $1 from every beer and every round of mini golf sold to a local charity of their choosing. For the month of September, they'll be joined by The Imperial Court of Sacramento.

The Imperial Court of Sacramento is also known as The Court of the Great Northwest Imperial Empire (CGNIE). Founded in 1973 they are a completely volunteer-based charitable organization Federal Tax ID 942808829. Their  purpose is to support the Gay, Lesbian, Bisexual, and Transgender communities through donations to recognized HIV/AIDS, social services, and youth support organizations serving those communities.

They further promote positive awareness of the ideals of the International Court System of which they are proud members. So come hang out at the Sacramento pub before you start the work week, and putt for a cause! See you Sunday!