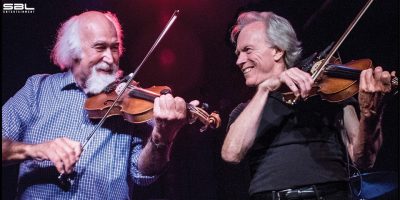 Two of the finest roots music fiddle players on the planet—Michael Doucet and Tom Rigney— are joining forces for a series of live performances on the West Coast. Backed by Rigney’s hot band, Flambeau, the shows will feature material from 2016’s critically acclaimed CD, Cajun Fandango, and the soon to be released new collaboration, Roll On.

The live repertoire is an eclectic mix of Roots Music styles—Cajun, blues, New Orleans—some original and some traditional. The band cooks up a storm, the grooves are guaranteed to get you up off the couch, and Doucet and Rigney tear it up in a spontaneous, virtuosic, deeply musical, and completely irresistible way. The rich sound of the two violins and the spectacular interplay of these two roots music masters provide a unique sound and an unforgettable listening (and dancing) experience.

Michael Doucet has been the premier Cajun fiddle player of the past several decades. Originally from Lafayette, Louisiana, he has led his band, BeauSoleil, for more than forty years (winning two Grammys and eight Grammy nominations along the way) and has taken Cajun music out of Louisiana and put it on the stages of the world. He has both preserved the music of his culture and expanded its horizons. The inheritor of a great tradition of Cajun fiddlers such as Dennis McGee and Canray Fontenot, he is also a composer and songwriter whose compositions have broadened and deepened the rich vein of South Louisiana music. A dynamic force of nature on the violin, he is a constantly inventive and compelling soloist.

Tom Rigney has, over the past several decades, become one of the premier blues and roots music violinists in the world. After fifteen years at the helm of the Swamp Rock band The Sundogs, he put together his current band--Tom Rigney and Flambeau--in 2000 and has toured and recorded extensively ever since. A prolific composer and songwriter, he has released more than a dozen CDs of original songs and instrumental pieces since 2000. His range as a composer runs from Cajun two-steps to Blues to roots Rock and Roll to heartbreakingly beautiful ballads and waltzes. His three blues violin CDs all climbed to Number 1 on the XM/Sirius Satellite Radio Bluesville Chart, and his recordings with Flambeau have gotten countless spins from Americana programmers all over the US and Canada. His high-energy, virtuosic playing and his commanding stage presence are hallmarks of Rigney’s performing style.