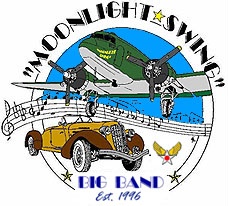 Organized in 1996, the Moonlight Swing Big Band is a step backward in time. Not only are the arrangements from the ’30s and ’40s, but the organization also strives for that vintage look through swing era attire, on-stage choreography, and arrangements taken directly from original 78s and V-Discs.

The Moonlight Swing Big Band is an incorporated not-for-profit, living-history musical organization dedicated to preserving the music of the swing era. As a full sized, authentic recreation of the big swing bands of the 1930s-1940s, with twenty members, the band performs for a variety of public and private venues and also recreates the great 418th Army Air Forces Training Command band of WWII, led by Capt. Glenn Miller.