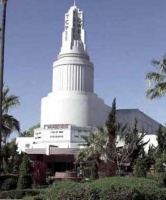 Opening in 1938, the Tower Theatre is Sacramento’s oldest remaining, continuously running picture palace. The first film ever shown at the Tower was Algiers, starring Charles Boyer and Hedy Lamar, which you could see for 25 cents general admission. Today, the Tower is dedicated to bringing the finest in independent, foreign, and specialty film to Sacramento’s film lovers. You can also rent the Tower Theatre for your next meeting or event! Group bookings are available every day of the week at the Tower.