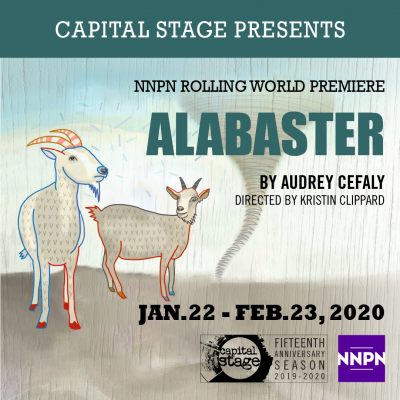 An all-female darkly comic southern drama about women on the verge, art and the power of human connection. After a tornado barrels through a North Alabama town leaving nothing but death and destruction, only June and her wisecracking pet goat Weezy live to tell the tale. When Alice, a prominent photographer, arrives to take pictures of June’s scars, every living soul on the farm is tipped to the breaking point in this epic tale of life after death.

Alabaster is the largest Rolling World Premiere in NNPN’s history with 11 productions being produced in the 2019/20 Season Nation-wide. In her Capital Stage debut, Kristin Clippard will direct this 2018 David Calicchio Emerging American Playwright Prize Winner. The cast will feature Stephanie Altholz, Janet Motenko, and new to Capital Stage: Amy Kelly and Susan Maris.